Amid the Coronavirus Outbreak, I Went to China

With so much news circulating about this virus, it’s easy to get caught up in the politics or shocking aspects of the COVID-19 outbreak. Recently, I went to China to visit my in-laws and found a surprisingly positive light into a room that currently is darkened by fear and a generally bad impression of China.

On January 19, I excitedly embarked on my first-time China trip to meet my in-laws and celebrate the Lunar New Year in Harbin, the capital of the northeastern Heilongjiang Province, dubbed the “ice city.”

It wasn’t until my first day of travel that I heard of the Wuhan-based coronavirus on TV and saw a broadcast-station news van at the LAX international terminal. At that time, I never thought the virus would impact my trip — I was just excited to be traveling to Asia for the first time. 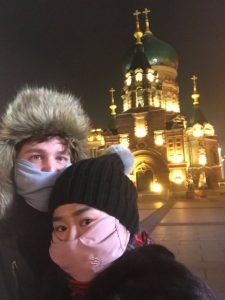 Once we were in Harbin, about 1,400 miles from the epicenter of the outbreak and with still little concern for the virus, I carried on with my trip and was looking forward to some home-cooked meals.

My 83-year old grandma-in-law, who lives on the sixth floor of an apartment with no elevator, prepared most of the meals and did just about everything one could expect from a doting elder, except pinch my cheeks too hard. The holiday food we ate included non-western dishes like silkworms, hairy crab, chicken stomach, squid with Chinese chives, hot pot and durian and less exotic, but uniquely prepared dishes such as sauerkraut, whole fish, porridge, dumplings, and oysters. 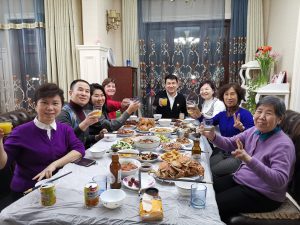 Most of these were sourced from a local wet market, which gets its name because it sells perishable goods, including live animals that are stored, sold and slaughtered in close proximity to other animals and humans. Authorities believe the coronavirus originated in the Wuhan wet market.

At the Harbin wet market, we were greeted underground by a cacophonous sea of shoppers and an abundant array of different vendors. Live turtles and crabs crawled at the sides of red, water-filled plastic buckets on one side. Across the way, flesh-toned butchered animal organs, like livers and pancreases, were displayed on metal trays. Retailers selling everything from dry goods to toys to Chinese herbal medicine also coexisted nearby.

While the turtles seemed crammed in their buckets, this market was also part of my wife’s childhood to the point where the smells brought back memories of home. Experiencing the wet market in Harbin made me realize how rooted in the community it was. To me, this impression created a view of the wet market somewhat at odds with the more extreme wet markets fraught with bats, civets and all manner of reptile that I had heard about in the media surrounding COVID-19.

As our visit continued, news reports and the overall commanding presence of the deadly virus intensified. Streets emptied.

Someone passed out from a non-coronavirus issue at a local McDonalds, causing widespread panic and news alerts.

My in-laws showed me a video about the government rapidly building a temporary medical center in Wuhan that contains over 1000 beds, and a family friend gifted my mother-in-law with a 3M facemask as a New Year’s gift.

Additionally, under government orders, all public ceremonies were canceled, tourist locations were all closed, and businesses were shut down but still required to pay employees even if they couldn’t work remotely. According to my wife, who grew up in China and lived in Harbin during the SARS outbreak, this was the first-time businesses across China have ever been shut down in this way.

Because public activities were largely canceled and my wife’s family feared for our safety, we mainly stayed inside – looking at old pictures, playing go and mahjong, getting a haircut and receiving cupping therapy. We were still able to go to the supermarket, convenience stores, the wet market or wander the city.

During this time, government and media warnings kept the streets and the retail locations that were still open very empty. We went to the closed gates of Jile temple, the biggest Buddhist complex in Heilongjiang, and walked around an empty amusement park adjacent to it. This area would normally be packed with tourists and believers praying for a good New Year, but we only encountered a few old men playing Chinese chess, a man practicing his Qilin whip technique, and a few other pedestrians.

Though everyone was taking measures to avoid getting sick, the people we encountered in the city were all very helpful and friendly. While quarantine in Harbin was relatively light at the time I was there, the Chinese people I met all took it upon themselves to avoid getting sick or passing along any illness.

Notes were placed on doors about reporting symptoms to the government, US airline companies began canceling flights, and we were afraid to so much as sneeze when traveling in public.

Soon, all we could do was stay inside or go to the supermarket, a convenience store or the wet market.

Family and coworkers were also sending me urgent messages to come home, and it became clear that we had to leave China, or we would risk being stuck there, so we booked an early flight to back.

At the airport we all wore facemasks, there were large digital signs showing how to put on a facemask, and our forehead temperatures were checked at several waystations. We also had to fill out a form verifying that we had no symptoms of the virus and had not been to Wuhan. 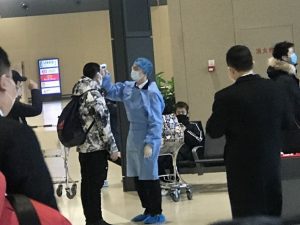 Once we returned home, my wife and I underwent a fourteen-day self-quarantine and heard from my in-laws that the streets in Harbin were blocked and guards stood outside apartment buildings to ensure people only went outside a few times a week. Additionally, a family friend of my in-laws reported that her father turned himself into the hospital with great fear and sadness when he had a fever and cough – which luckily, turned out to be a cold.

Of course, my positive-minded mother-in-law would never complain about such things, but it must have been distressing. My wife, who is a Chinese language teacher in Los Angeles, also informed me that many parents took their kids out of the classes at her school to avoid any contact with the virus.

It also saddened her when she heard one of her students say the disease was “made in China.” 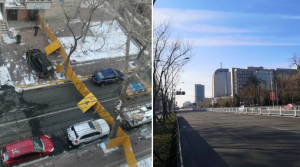 Today, fresh from my 14-day voluntary quarantine, the universal messages of companionship from my hospitable in-laws and the opportunity to become better acquainted with their personalities resonate the most from my trip.

While some individuals or government policy may be to blame for this outbreak, it’s unfair to broadly condemn and shun all Chinese people based solely on their customs or outward appearance. I think it’s important to learn from incidents like COVID-19 and support more sanitary practices.

Now, COVID-19 is making its way to LA. At a time when something new, like this virus, appears and reshapes the world we live in, we should ask how we can become more tolerant, understanding and caring, not how we can shun people or isolate an entire culture. 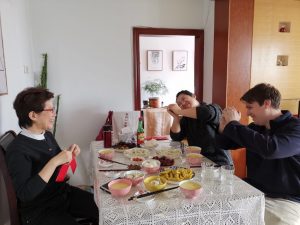 My wife and I giving thanks for red pocket.

Read this story on The Bipartisan Press here – http://bit.ly/2vaFwyh